Discover How We Made: Hedonism Felicitas 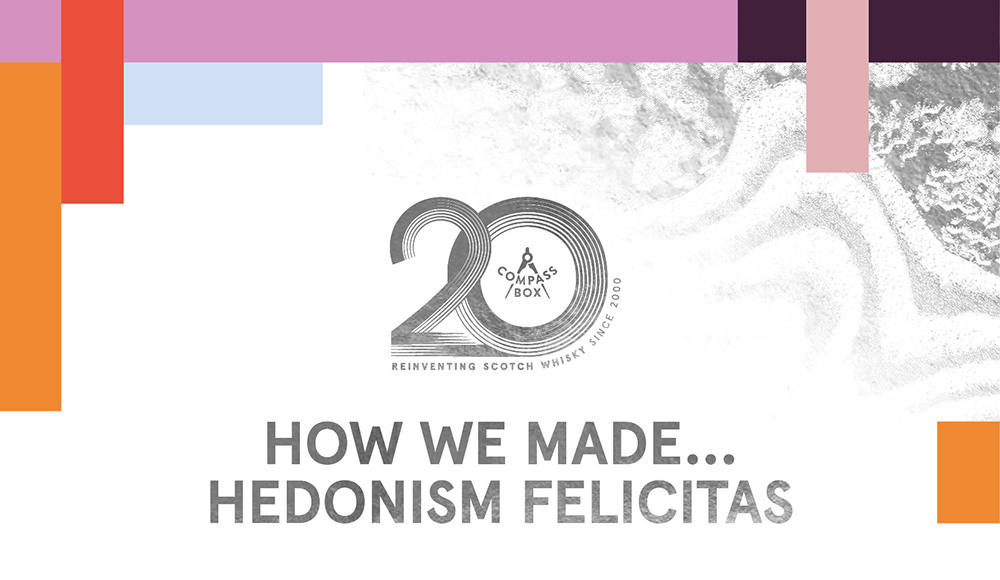 A 20th anniversary limited edition, Hedonism Felicitas is a vibrant and stately re-imagining of the whisky that launched Compass Box.

A tale of two whiskies (and plenty in-between)

In 2000 we created Hedonism, the whisky that started the Compass Box story. This latest limited edition is both a celebration of where we have come from, and the beginning of another exciting chapter.

What makes up Hedonism Felicitas? The largest single component hails from the now-closed Port Dundas Distillery. Distilled in 2001 and aged - as we later learned - in Sherry butts, it provides notes of sweet wood spice, toffee, and honey. These flavours are balanced by the graceful vanilla creaminess and orchard fruit intensity of whisky from the Strathclyde Distillery, distilled in the 1980s, and the passion fruit, cardamom and coconut notes of two small parcels from the North British Distillery produced in the nineties. The majority of the components were distilled before we released the very first Hedonism.

James Saxon explains: “The whisky from the Port Dundas Distillery proved a crucial component, yet it came in disguise. The casks had been identified on our records as first fill ex-Bourbon barrels and they behaved like especially active examples of this cask type. Clarification revealed them to be refill Sherry butts, an unusual cask in which to mature grain whisky. With these Sherry butts included, Hedonism Felicitas suddenly found its anchoring richness. And then there was the bottling strength - at 53% ABV the flavours really sang.”

To celebrate our 20th anniversary, our Founder John Glaser is hosting a live interactive tasting of the new limited edition on 27 September 2020. We’d love you to join us, either with your own bottle, with our signature Hedonism, or just to hear more about the story of this whisky

Register for your place at pleasedrinkcreatively.com. We hope to see you there!