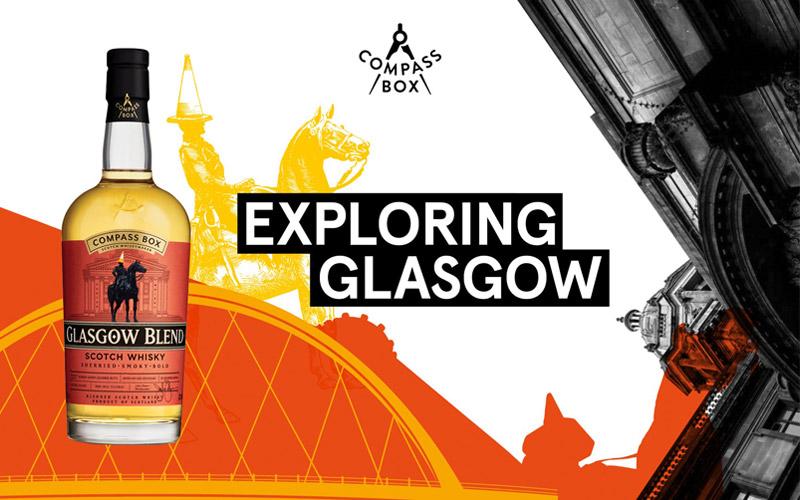 Glasgow Blend and Artist Blend. Two very different whiskies, inspired by two contrasting cities. Pour yourself a glass and join us as we delve into the elements that make Glasgow bold and vibrantly sociable.

Glasgow is a city known for fearlessness, edgy humour and mischief. So much so that they’ve got their own word to describe bold and daring acts – gallus. And Glaswegians are not shy about their long-standing love affair of the public house. Like the city it's named after, Glasgow Blend is strong in character with bold Sherry notes and a bracing smoky finish. The whisky itself was inspired by the writing of Aeneas MacDonald in his classic 1930 book, ‘Whisky’ which describes Glaswegians as historically preferring fuller-bodied and smokier whiskies. Rich, robust and flavourful – Glasgow Blend is a whisky that’s gallus to a tee. 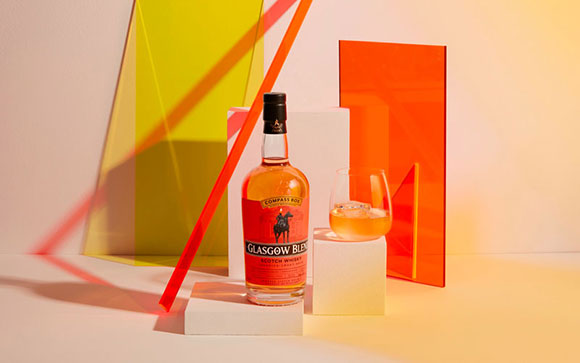 Enjoy Glasgow Blend On The Rocks

It’s almost impossible to discuss Glasgow without mentioning some of the comedy greats that call it home. From the fictional Rab C. Nesbitt to Frankie Boyle and Kevin Bridges selling out tours worldwide, the gallusness of Glasgow spreads around the globe. In the centre of the city you’ll find a tribute to the Big Yin, Billy Connolly, commissioned by Glasgow City Council and brought to life by artist Rogue. This is one of many art works along the Merchant City Mural Trail, spread out over the cobbled streets. The most notable murals include that of Glasgow’s Patron Saint, St. Mungo, painted by Smug in 2016, and later the mural of St. Enoch. 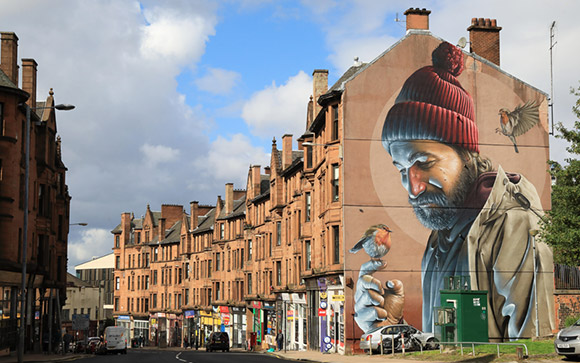 The Barrowland Ballroom – affectionately known as The Barrowlands – is a great story of an East End dance hall turned iconic music venue. After the Barrowlands burned down in 1958, the central wheel of the wheelbarrow figure that once lived on the roof was rescued from the fire. It was returned to its rightful spot on the entranceway ceiling for the Christmas reopening in 1960. 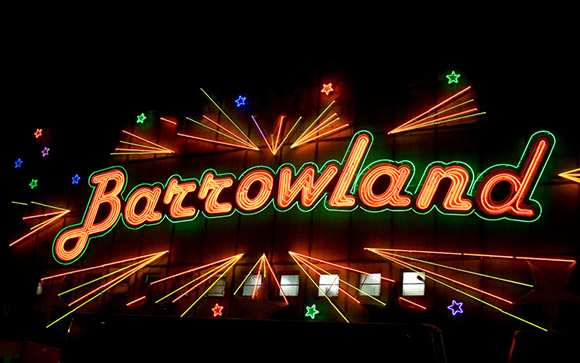 The Cure, Oasis, The Smiths, Iggy Pop, Metallica, Blondie, Bob Dylan, Björk, David Bowie, Blur, and Marilyn Manson have all played there, sharing the limelight alongside the brilliant neon stars that adorn the front of the building. It’s a galaxy all of its own. The Glasgow music scene doesn’t stop there, however. Moving further along the iconic River Clyde, the former industrious shipyard is now home to the SEC and SWG3, music venues that play host to some of the world’s biggest musicians and acts.

Close by lies a landmark which truly captures the city’s rich industrial heritage, and is a spot that Jill Boyd, our Whiskymaker and Glasgow aficionado, says would be her dream view. The iconic Finnieston Crane or ‘Cran’ is a 175 ton cantilever quayside crane which looms over the Clyde. A relic of the age when Glasgow’s shipyards made it one of the most powerful and important industrial cities in the world.

One of Glasgow's main architectural influences is Charles Rennie Mackintosh. Mackintosh was known for demanding creative freedom, pushing boundaries and experimenting with decorative forms. Today you can see his influence in much of the city, from The Lighthouse down Mitchell Lane to The Willow Tea Rooms on Sauchiehall Street. Mackintosh’s desire to transcend expectation is still very much alive in Glasgow, and it’s there too in the ethos of Glasgow Blend. 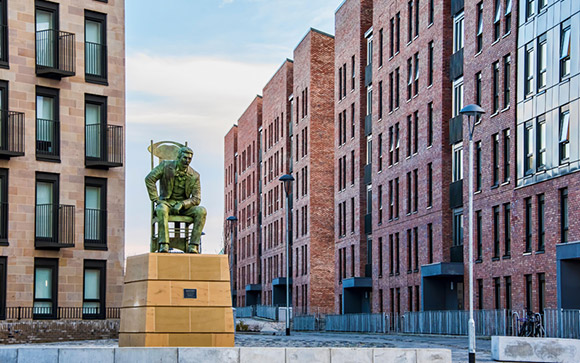 If you head to Sloans Bar near Merchant City, you’ll find a mural of the famous Duke of Wellington, the traffic cone-wearing muse that also takes pride of place on our Glasgow Blend label. On the mural he’s depicted asking “Are ye dancin?” to a feisty blue-haired busker, who answers in true west coast fashion “Are ye askin?”. And if you’re passing there after a highly recommended whisky tasting at the Pot Still on Hope Street, you’ll definitely have a spring in your step. So don’t be surprised if you find yourself looking at the Duke square in the eye and replying: “Are ye asking?”

‘Are ye dancin’?’
Slang for ‘would you like to dance with me?’

Just a short stroll from the city centre, tucked away in the East End of the city, lies The Barras Market. A place for trading curiosities and antiques, home to indoor and outdoor markets where punters can barter to their heart’s content. Easy to while away the hours there, it’s full of character and old-school charm, a fascinating reflection of the trading hub days of Glasgow’s past.

Antiquing will certainly build your appetite, and definitely warrants a reward. If it’s a sugar hit you’re after, look no further than Tantrum Doughnuts. An independent shop serving creative handcrafted doughnuts – Jill highly recommends their salted honey ring. It’s something she would happily devour every single day, and believes a pairing with the smoky sweetness of Glasgow Blend would make it a special treat to share with friends. 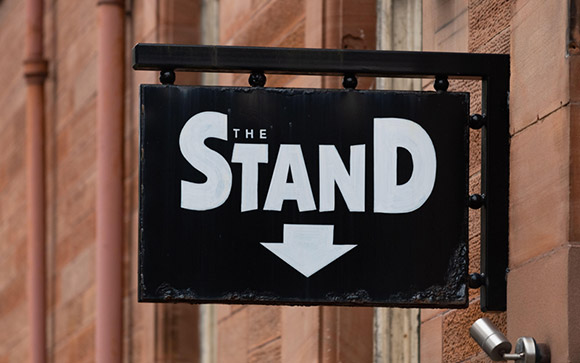 Not too far from Kelvinbridge in Woodlands is the infamous Stand Comedy Club, the sister of the Edinburgh venue. The Glasgow comedy circuit has nurtured many famous acts, but the true spirit of comedy is most alive on the amateur circuit. With improv nights and new acts regularly showcased by a fantastic compère, The Stand is an intimate venue with an unmistakable character. As an alternative to The Stand, Jill recommends Oran Mor, just off the Hillhead Subway Stop, for a mid-afternoon show at A Play A Pie and A Pint. It’s a quirky event that does what it says on the tin – theatre shorts during a lunchtime matinee. 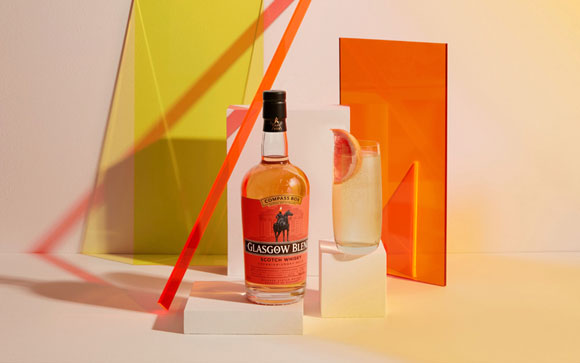 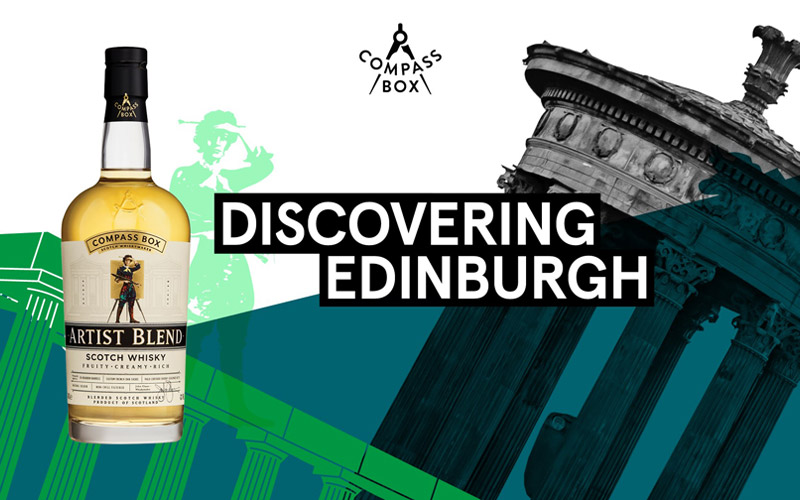 Take a trip to Edinburgh